It all started at 7 am on March 14th. After a week of mid term exams and the lack of sleep that goes with them, Rachel, Jasmine, Kate and I were all ready to embark on our 10-day journey across Europe for our well-deserved spring break.

First stop was Paris- a place I had been to almost six years ago with my step mom and sister. I fell in love with Paris when I was 15 and I was excited to revisit my love as a mature (almost) adult to take everything in again and appreciate it even more.

After a short flight (I will never get over the fact that you can be in such amazing places in a little over an hour) it was off on the adventure to find our hostel, which took several hours, multiple metro lines, this tiny woman carrying her huge suitcase up and down flights of stairs and a very nice man who offered to help said tiny woman with said huge suitcase. At the end of this very long tunnel, was the very very dim light that was our hostel. I’m all for roughing it and was expecting it pretty rough on my college student budget, but this hostel was a bit more than that. Let’s just say thank God I brought my own pillow case and flip flops for the shower. The silver lining to this was the fact that on our way to the hostel, suitcase and all, I stopped for a Parisian crepe. I was the perfect display of the art of multi-tasking- being lost, fighting with a large suitcase and eating a Nutella and banana crepe all at once.

We freshened up a bit then headed out to the thing we were the most excited for. The thing we had been counting down the days to, what we talked about and dreamed about and now finally, couldn’t believe we were within reach of. Chipotle. Yes, you read that right. The thing I miss the most from America. I actually did dream about eating a burrito the night before Paris so you can imagine how excited I was to be standing in line, almost literally crying of happiness. After getting strange looks from the staff I sat down and in record timing consumed a child-sized burrito. It was, hands down, the most amazing burrito I have ever eaten.

After indulging ourselves with a little taste of America we decided to take in the culture that Paris has to offer and of course went to the Lourve. Being the huge art nerd that I am, last time I was in Paris I spent about two days in this museum, which does it no justice. You could spend weeks in this place just taking in all of the masterpieces it holds. Needless to say I was ecstatic to be back and once again, bring out my inner nerd. We strolled around and saw all the big pieces, Mona Lisa, Venus de Milo and a personal favorite, Cupid and Psyche.

Being extremely tired from traveling and getting very lost within the walls of the museum, we decided it was time to stroll over to the Eiffel Tower and grab some dinner. We took about a million pictures of the Eiffel Tower as it lit up the Paris sky with its twinkle and majesty and I once again took in the magic that Paris has to offer. I can never quite explain what it is about this city. I’m not French and the only words I know how to say were taught to me by Nicole Kidman in a very risqué movie, but it is something about this place. I like to call it the Manhattan of Europe. It’s magical, breathtaking, sometimes a little too much, but you just can’t help but love every bit of it.

We called it a night after a very over priced dinner, where, of course, I got my chocolate milkshake fix, and finally headed to bed.

Struggling to wake up at an early hour, we headed out for some crepes for breakfast and then it was off to take a three hour walking tour of the city, provided to us for free by Sandeman’s New European Tours. I highly recommend these to anyone traveling to a new city. They are very informative and the guides are so knowledgable and helpful! Our guide took us to all the major sights and some of the lesser known ones as well. I took in all of the scenery and the wealth of unknown facts the guide was telling us and definitely had more appreciation for the city knowing all of its history and stories.

Two of my favorite things on the tour were the Love Lock Bridge and the Cathédrale Notre Dame. I had never heard of the Love Lock Bridge before but learned that couples come here with a lock and put it on the bridge as a symbol of their unbreakable love and then throw the key into the river. It was very romantic as we watched couples carry out this tradition. I also learned that this is the bridge where Carrie Bradshaw chose Big in the final episode of Sex and the City. Being an over the top fan of everything Sex and the City, this was definitely the most exciting part for me.

My second favorite part of the tour was Notre Dame. A masterpiece and amazing work of art, this cathedral embodies everything I love about historical art and architecture. I love the style of the building, the arches and most of all the beautiful stained glass windows. It is definitely a spiritual experience being in such a beautiful place of faith.

Midway through our tour we were given a break and we took the opportunity to hunt down some traditional French macaroons. The bakery we went to had many different choices and I settled on rose and vanilla. Rose seems to be a common macaroon flavor and though it may sound funny at first it definitely became my favorite flavor.

After our three hour tour we headed over to the iconic Champs-Élysées. Of course as college students we could barely afford to even look at most of the stores, which include Tiffany & Co., Louis Vuitton and Chanel. However, we did pop into my homeland-Sephora- and did a little shopping in H&M. Then we visited the famous Arc de Triomphe and took a lot of photos in the tiny circle in the middle of the street, deemed the most dangerous intersection in Paris. All tourists have is a little circle in the middle of this extremely busy intersection and when you pack about a dozen of us into this area all waiting to take pictures you definitely see your life flash before your eyes. The adrenaline rush was worth it though because we got some amazing pictures.

Then it was off for some dinner and a night out on the town. There were some early St. Patty’s Day celebrations going on so we joined in the fun and danced the night away. The next morning it was off to Versailles. A great thing about this weekend was that all public transportation was completely free because of the smog and pollution problem in Paris. But hey, a couple extra puffs on the inhaler are worth it to travel for free!

It also pays off to be a student in Paris because every museum we went to was free, including the pricey Palace of Versailles. We wandered around the palace and took in the history and obviously took selfies in the hall of mirrors. Seeing as how it was a gorgeous day we took full advantage of the sun and explored the beautiful gardens. We sat in the sunshine and made jewelry out of daisies. After quite some time we decided it was time to make the journey home, grab some dinner and get to bed early so we were well rested for the second leg of our journey: London! 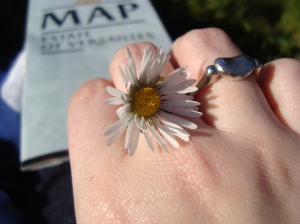 The dinner we had that last night in Paris was unbelievable. I know I say this about a lot of the food I eat in Europe but I officially have a new obsession with goat cheese. Next stop London! 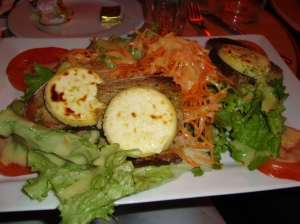