After a busy couple of days in Paris, we were off to London to see some friends and do some more exploring. The flight seemed to go by in the blink of an eye and when we arrived we were ecstatic to be in a place where we could finally understand everyone and everything. We thought the trip was off to a good start. However… when I went to baggage claim to pick up my bag I noticed that there was only one lone red bag circling the belt, but it wasn’t my red bag. I immediately started to freak out and ran to the customer service desk. Thank goodness I was greeted by the nicest older English woman. She immediately went about fixing my problem and personally called Jonathan, the bag thief, and told him I was flying home to JFK in a little and desperately needed my bag and that he could not leave the airport yet. She apologized to me for lying but said it was necessary so he didn’t leave the airport and go into the city before he returned my bag to me. I told her it was of course okay and thanked her many times over. It is people like this that make a bad situation into something to laugh at. Instead of this ruining my vacation it made it better because I was lucky enough to meet, even if only for a brief period of time, someone so sweet and genuine.

So then it was time to wait for Jonathan, for what seemed like forever. We searched the area around the decided meeting point and found nothing. Once again, I was lucky enough to meet the funniest English man who worked at the airport. He kept asking where Jonathan was and if I wanted him to beat Jonathan up for me. I quickly learned that people in London are some of the friendliest around. We then started harassing strangers with red bags and finally Jonathan arrived. Unfortunately he wasn’t the extremely attractive future husband my friends and I conjured up in our minds that I was going to meet in a romantic, it-must-have-been fate scenario but he came with my bag so it wasn’t terrible after all. He apologized and said he was picking up a friend’s bag and didn’t look at the tag when he took it. A short while later while we were driving to our friends’ apartment, we saw Jonathan fighting with his rental car on the side of the road and it was clear that today was just not his day.

When we finally arrived at Dani and Megan’s apartment, my friend and roommate from freshman year, we dropped our stuff off and immediately went to Sainsbury’s, a place we would soon become obsessed with. This is the general grocery store in London and seeing as how London is one of the most expensive cities in the world we were trying to eat on a budget, AKA eat grocery store sandwiches, which were actually the most amazing things I have ever tasted. For the next four mornings I woke up looking forward to my cheese and red onion sandwich, salt and vinegar chips and chocolate milk or a Naked Juice. I love Naked Juices and drink them all the time at home so it was a welcoming sight to see them in the store. After consuming a lot of things we can’t find in Rome it was off to Oxford Circus, an area in London with tons of shops, to find something green for our St. Patty’s day celebrations later. After striking out in every store, I finally gave up and decided to wear a black shirt because I was too tired to keep searching. It seemed as if London completely banned everything Green in an effort to stop the drunken celebrations that accompany this holiday. I was not too tired however, to have one of London’s famous and actually to-die-for Ben’s cookies. Because of the intense sweet tooth I have (thanks Dad) I can never resist anything sugary and especially love my chocolate chip cookies. I was overwhelmed by the choices but finally settled on a triple chocolate cookie- a chocolate cookie with chocolate chips and chunks of soft white chocolate in the middle. I am actually drooling just typing that.

We went home got ready and met up with a lot of people from the University of Maryland and it was especially nice seeing Dani and Megan again. We celebrated St. Patty’s day like any other Americans: we drank, went to an Irish pub and did some version of an Irish Jig all night. It was a blast. Then it was off to bed to prepare for another jam packed day of sightseeing.

First thing on our to-do list was of course platform 9 3/4. We all chose our houses and took silly pictures then went to do some souvenir shopping in the Harry Potter store.

We then made our way over to the area where we were meeting our Sandeman’s tour guide for another one of Sandeman’s free walking tours. On our way we stopped for traditional fish and chips, which I surprisingly really liked.

After that it was three hours of walking and history and sights. I learned a lot of the history of London and England as whole and of course saw some amazing things. We took lots of pictures with the guards in funny hats in front of St. James’ Palace and took the iconic pictures of us in phone booths with Big Ben in the background. Fun fact: Big Ben isn’t actually the name of the entire building, it is just the name of the bell.

After the tour we followed our guide to a traditional English pub where we had an authentic English beer. Being in a place that has more than pasta and pizza, we desperately wanted Indian food. So we wandered around until we found a street filled with  international cuisine and enjoyed some delicious Thai food; we were sure to steer very clear of anything resembling Italian food all Spring break. Later we went out to a club where I ran into a friend from high school while waiting in line. Just another example of how small the world is. It was in this club that my assumption from the night before was correct.

Wednesday brought more sightseeing, this time with my friend Laura from high school who had just visited me in Rome the weekend before. It was funny seeing her in all of these foreign places because we don’t even see each other this much during the semester when we are in the same country. First stop was Abbey Road, made famous by the Beatles and used by hundreds of angry people trying to drive in London. All this road has is a stop sign in an effort to stop cars from running over the dozens of tourists that visit it on a daily basis. Needless to say we almost died about 100 times but it was worth it to get that perfect picture.

We then went to the underwhelming London Bridge. I am confused as to why this bridge is so famous but it wasn’t at all what I was expecting. It was just a plain old bridge where tourists felt the need to take pictures because of its famous name. After the bridge it was time for the best part of any new city- exploring the local markets. First was Borough market where we had some amazing paella, fresh fruit juices and of course I had a giant chocolate chip cookie. Second stop was the Camden Lock market, which has food, clothes and other items. We walked around and went into every store with a t-shirt in it so Rachel could find one of Abbey Road. After many hours and failed attempts we finally called it quits and headed over to Harrods where we looked at stuff we couldn’t afford, got very very lost and indulged in “high tea.”

Rachel and I split an amazing rose tea (rose is apparently a flavor I fell in love with during Spring break following my rose macaroon in Paris) and we all felt very English-Posh as we sipped on our teas and attempted to discuss things  of importance. However, when it comes to four college women sitting around a table the conversation always steers away from serious and towards more entertaining topics, but hey, we tried. 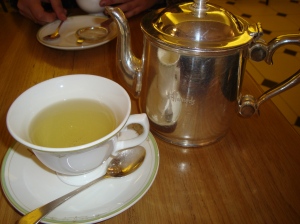 Rachel and I left a little early so we could head over to Buckingham Palace to be super touristy and try and make the guards laugh. We showed up as the sun was setting and were disappointed to find that there were no guards. We figured it was because it was getting late out so we walked around the building and saw them behind it having what looked like a very stern meeting with their superior. We then found a nice police officer, went up to him and said “I have a question.” He replied with an adorable answer- “Only one? But you’re so young.” Truer words have never been spoken but in this instance we really did have only one question- where are the guards in the red jackets and fluffy hats? He informed us that because the guards often get harassed, sometimes they stand within the large gate of the palace, closer to the building and out of the pesky tourists’ reaches. He also told us the guards we saw in front of St. James’ Palace were the same iconic ones everyone comes to see just in different jackets. So we left to go to Picadilly Circus, which my friend Laura described as the Times Square of London.

Indeed it was a less-crowded version of Times Square, which of course made me miss my favorite city, Manhattan. We decided that we had done enough walking for the day and headed home for some dinner. The dinner Kate, Rachel and I had was good but it was a good thing we didn’t come hungry because the portions were miniscule. So we ate quickly and of course went to Sainsbury’s one last time to get our signature breakfasts for the morning before our flight. It was early to bed because the next day was the last leg of our trip. It came all too soon but I was excited to get to Dublin!

“I love to see a young girl go out and grab the world by the lapels.”- Maya Angelou