After a few days in London we headed to the airport for our flight to Dublin. We had a few technical difficulties but Rachel and I finally arrived at the airport with Jasmine and Kate not too far behind. Fearing that we were late for our flight Rachel and I rushed through security and were heading to our gate when we were stopped by a man giving out free samples. Assuming it was just another annoyance we brushed him off until we realized he was giving out vodka samples. Being the broke college students that we are, it is almost illegal to pass up free alcohol. So we indulged in a taste and were quite pleased. As we were walking away we realized that there were multiple people with multiple types of alcohol giving out free samples so our indulgence continued. We moved on to the Jameson tasting station, followed by the rum station and finally finished with a shot of coffee Patron and classic Patron. As we were on our marathon of alcohol sampling we kept running into the same two older women who we finally found out were doing a weekend girls trip to Dublin. They insisted that we go out to Temple Bar later in an effort to find them so they could buy us some drinks- and people say airports are boring.

Despite being a little dazed by our previous sampling binge we definitely felt all of the turbulence that our plane experienced and after a rough flight and a few panic attacks later, we arrived in Dublin- a place I have always wanted to go. I’ve always wanted to travel to Ireland and explore the gorgeous countryside but at the moment Dublin was where I would begin. I came to realize that despite the crappy weather I completely loved Dublin. The people and the culture are so different from anything I have experienced and I love their carefree attitudes (the accents on the cute guys don’t hurt either). Ireland is definitely a place I will return to so I can explore more.

We arrived at our hostel, checked in and immediately wanted to eat at an authentic Irish pub. We wandered around the area by our hostel, the infamous Temple Bar- known for drunken tourists but still so much fun nonetheless. We ended up at O’Sullivans and enjoyed some warm tomato soup, a welcoming meal on a rather chilly and rainy day, and a nice glass of Harp beer. Then we unanimously decided it was time for a nap. After sleeping the rest of the day away (it was very much needed) we got ready for dinner. We ended up at Merchant’s Arch, an adorable little restaurant/pub near our hostel and enjoyed some more Harp, Irish stews- I stuck to my vegetarian options of mushrooms and spring rolls- and live music, which we quickly realized was everywhere in Dublin. The live music at all of the venues was so nice and I thoroughly enjoyed eating my meals to the sound of a guitar. 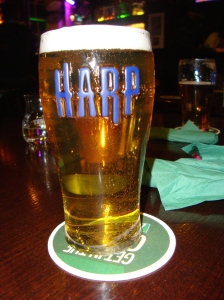 Then it was time to hit the town in Temple bar. We went to all the places our friends had recommended and bar hopped the whole night. It was a mixture of Irish jigging, house music and at one point a song from The Jungle Book even came on. Needless to say it was quite an interesting night but still very fun.

Friday morning we had our last Sandeman’s tour of the week. Our guide took us around Dublin and shared its colorful history with us. Not having a lot of knowledge about Dublin it was very nice to get an insider’s perspective into this quirky little city, apparently with quite a few jokesters who have played pranks on the city, which include erecting a monument to a fake war hero who never actually existed. We saw some castles, churches and Trinity College, which, for all of you Game of Thrones fanatics like myself, is where Joffrey goes to school. I was surprised to find out that despite how his character comes off on the show he is actually one of the sweetest people out there and very very smart as well. We ended our tour with stories of Ireland’s sadder history and how the people have rebuilt it and have intense pride for their homeland.

One of the most interesting parts of the tour for me was the bust of a famous Irish journalist, Veronica Guerin. She was a crime reporter in Ireland and reported on many dangerous stories about crime and drugs. She was more interested in getting the facts straight from the source and exposing the truth than she was in her own safety, risking her life in order to get to the bottom of things.  She faced numerous death threats and attempts on her life from the criminals she was exposing but she did not give in to their intimidation. Unfortunately, she was murdered on June 26, 1996 by drug gang members. However, some good did come her death; it caused an outrage among the people of Ireland and within a week of her murder the Irish Parliament enacted the Proceeds of Crime Act 1996 and the Criminal Assets Bureau Act 1996, so that assets purchased with money obtained through crime could be seized by the government. This led to the formation of the Criminal Assets Bureau (CAB). Members from the drug gang that killed her were arrested and the investigation into Guerin’s death resulted in over 150 other arrests and convictions, as well as seizures of drugs and arms. Drug crime in Ireland dropped 15 percent in the following 12 months. This made a special impact on me because as a journalism student it showed me that one journalist can make a difference and make a change in the world. 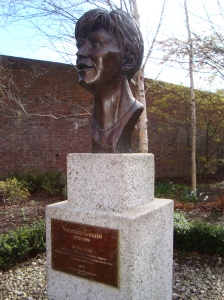 After taking in all of the knowledge from our tour guide it was time to eat and we were lucky enough to stumble upon a buffet place that served all of our favorite American dishes. Needless to say we piled our plates high and stuffed ourselves. Feeling just a tad bit weighed down from all of our food we strolled along the roads and did some serious souvenir shopping, picking up gifts for the dozens of people in my family. Later that night we did a pub crawl and unfortunately were disappointed. So Rachel and I hopped off of it in search for some real Irish pubs not crawling with tourists. We asked the man working at our hostel for suggestions and walked far away from the touristy area of Temple bar in the search for some real Irish culture (and men). After roaming and popping in and out of numerous bars we finally surrendered and went to bed.

Our last full day in Ireland was dedicated to a trip to the small town of Howth about 30 minutes outside of the city. Here we had some crazy weather, with it clearing up just in time for us to embark on our hike up mountains and then hailing on us as soon as we finished lunch and continued our hike. Despite the freaky weather it was a gorgeous hike and the views were unbelievable. We saw more castles, learned about the family that has lived in it for decades and then ate lunch in a small, but apparently very coveted town at the top of the cliffs. 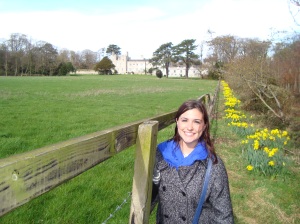 Pictures definitely do not do these views justice, as they were some of the most amazing I have ever seen. This trip reassured me of the interest I have always had in Ireland and convinced me that my next trip here will be to a more country-side type of town.

Feeling exhausted and thoroughly worked out from all the climbing, we went home and had our last meal in Dublin at a place many people raved about. I had an amazing goat cheese (obviously), onion, mushroom and sautéed vegetable sandwich on fresh toasted bread and was feeling especially satisfied. We sat and chatted for a while and reflected upon the past ten days and all of the adventures we had had. I was sad that our fabulous break was over but was excited to go back home to Rome (I still can’t get over the fact that I can call Rome my home) and continue our European adventures. Dublin definitely left its mark on my heart and was the perfect way to end our trip.

“Ireland is where Strange tales begin and happy endings are possible.”- Charles Haughey